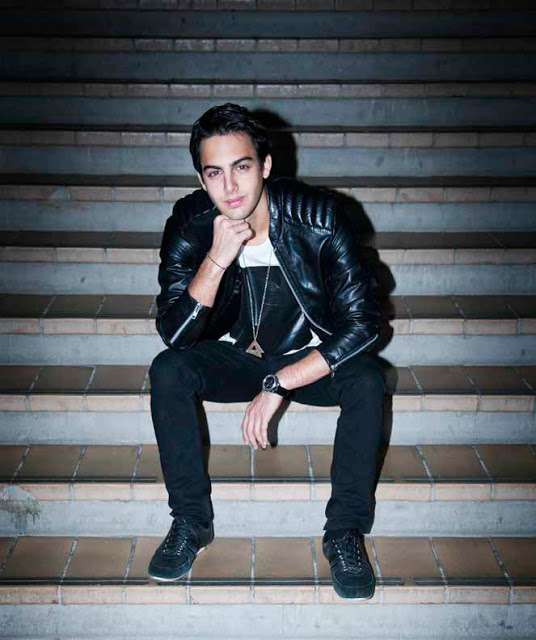 Darin Zanyar
Age: 25 years old.
Lives: In Stockholm.
Family: Single.
Does: Artist.
Current: Has his day in "Så mycket bättre" on Saturday, 8 o'clock on TV4. Releases his sixth album "Exit" in the end of January next year and is going on tour in the Nordic countries in April.

Darin Zanyar's interpretations score in "Så mycket bättre". He dominates the iTunes chart with his versions of the other attendants songs. Tomorrow it's his day in the music show.

Will we get to know you more tomorrow?
-  I think so. It got very emotional a while during dinner. I can't reveal too much but I'm not used to being so consigned. I don't usually talk that much about private stuff, my family and go in too deep. I didn't plan to do so, it just felt natural when I sat there.

Your interpretations have all been on iTunes top 10 chart. Now they dominate the charts three highest places. What is it that makes people like your songs?
-  Because I have done them wholeheartedly. When I did some interpretations I thought "should I really go this far in my direction?" But if I'm gonna do the songs I'll do them in my way. I'm incredibly happy that people like my interpretations.

Were you prepared for all the success you would get?
-  Not in this way. It's funny that it has gone so well and that people like my interpretations. I feel very pleased with the songs.

Have you gotten any feedback on your interpretations from the other attendants?
-  I got an SMS from Linda (Miss Li) recently who wrote: "You're awesome!". And I met Magnus Uggla a few days ago and he said he was really pleased with my interpretation of "Astrologen".

"Så mycket bättre" is known for giving the attendants a more successful career. Did you feel that your career needed a fresh start when you said yes to being in the show?
-  No, I released the song "Nobody knows" earlier this year and it went well so that wasn't a reason for me to participate. I thought that the show was a good way to show a more personal side of me and what I can do musically. I've noticed that "Så mycket bättre" has given me a new audience that I haven't had before.

Why didn't it happen anything between you and Maja Ivarsson?
-  Well, it could have been because there were cameras around us all the time. I like Maja as hell but right now we're just friends. We will see what happens.

Miss Li - "Här kommer natten" by Pugh Rogefeldt
It was the first time I saw Miss Li live and heard her sing. Damn, she's a great singer! I was happily surprised.

Magnus Uggla - "Jag och min far" by Olle Ljungström
It was such a moment. I thought "don't start to cry now". It was a very strong, touching interpretation and I think you could tell that even through the television.

Sylvia Vrethammar - "Hej Monika" by Maja Ivarsson (and Nic and the Family)
I couldn't stop smiling, it was so funny. It was such an unexpected choice of her. It was damn cool.

Darin - "En apa som liknar dig" by Olle Ljungström
I was nervous before and thought "will Olle like it?". When I saw that he liked it I could relax.

Maja Ivarsson - "Want ya!" by Darin (airing tomorrow)
It was so damn cool to hear her sing that song. I've always liked The Sounds so it was huge for me that she sang that song.

In the end of January next year Darin's new album "Exit" will be released. He hopes that his participation in "Så mycket bättre" increases the interest for it. "It's pretty different from what I have done before. The lyrics are more personal and detailed. If I should describe the album with one word it's cool" he says.