December 24, 2012
Tomorrow there's a special Christmas episode of Så Mycket Bättre airing at 20:00 CET on TV4. But before that, we have translated for you some extra material that was on TV4's website, parts that were cut off from Darin's day.
Unfortunately, the videos were locked, so it was not possible for us to take them, but we're sure that you've never heard most of the things you're going to read right below.

THE LUNCH
- After Maja's performance, Darin speaks a bit about how he wrote Want Ya. He wrote it together with George Samuelson, who had created a beat that he played for Darin in the studio. When Darin heard it, he started dancing right away. During a vacation in Greece with his family, he sat down and tried to write something more to that beat, but he had a hard time coming up with ideas. However, when he got home and started working on it in the studio, they finished it in one hour.

Darin also tells the others that his parents have always supported him and liked what he does.

- After Pugh's performance of Money For Nothing, he talked a bit about that song, which was written by Robyn. He says that the choice for the first single was between that one and What Is Love, but at last he decided to choose Money For Nothing.

- Maja asks him about how he handled the fame at the beginning, when he got famous so fast. Darin answers that all the attention made him very shy, shier than he actually was. He thinks that any other person would react in the same way if something like that happened to him/her. Later on, he says that when he was competing in Idol 2004, there was a rumor that said that the famous producer Max Martin had written a song to one of the contestants, and Darin eventually found out that he was the one Max Martin had written the song to.

- After Olle's performance of Who's That Girl, they talk about that song, and Darin tells them a bit about the music video. In the video he almost dies, and we get to see sequences from this "other world" between life and death. He is chasing a girl there, wondering who she is. When they finally meet, they are supposed to kiss each other, and this is something that Darin had nothing against at all. The girl is a top model (for Victoria's Secret today) and when they recorded the kissing scene, they had to do a few retakes, and Darin enjoyed that. Every time they had to do a retake he looked at the director saying "Thank you".

- Miss Li ends the lunch by saying that she thinks Darin is, despite his young age, the most mature person among them all. Darin appreciates this a lot. 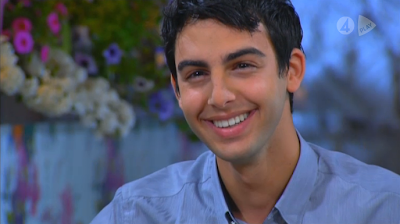 THE DINNER
- After Magnus performance of You're Out Of My Life, Darin explains what this song means to him. It's about someone you have lost, and for him it feels like you should tell everyone you love how much you love them before it is too late, because life is short.

- Darin tells them about the first time he went to Kurdistan. He was about 4 years old then, and he thought that all the people who spoke Kurdish were his relatives, because that's what it had been like with all the Kurds he had met in Sweden. So because of this, every day he went to a candy store, took some candy and then left, without paying anything because he thought that the store was owned by his cousins or someone related to him. The owners of the store didn't say anything at first, because they knew he was from another country. But after a week they told his uncle "Your nephew is stealing candy from us".

- After Sylvia's version of Step Up, Darin says that that was the first song he wrote in a studio, together with RedOne. It was supposed to be on his first album, but then he chose that the song The Anthem should be there instead because it was more of a RnB song.

- Miss Li asks Darin about all the crazy stuff his fans have done, and he tells them about one time when he went to Bollnäs to attend an intensive course to learn how to drive a car. He was supposed to be there for a week and when he got there he noticed that someone had found out that he was going to be there and told it to the whole city, so when he opened the door he heard all the people who had gone there to see him screaming. He couldn't concentrate on driving and when he tried to do so, people jumped at the car and tried to open the door. He went home after being there one day.
Så Mycket Bättre