October 18, 2012
We all know Darin has been in L.A. during these days to work on his upcoming album. That was a great chance for some of his american fans to meet him in the streets or even in the lobby of the hotel he's staying in. Here's the experience of Christian Medina, a boy who's got a lot of patience and love for our Idol.


Hey guys, here is the little story of my experience meeting Darin!I knew Darin was in town for a few days, I wasn’t sure for how long or where exactly I could find him. So I went on twitter to ask him if there was a possibility I could meet him while he was here and I came across someone else who was also a fan of his and it turned out that she had met him that same day. I immediately jumped at the opportunity of meeting him after learning where he was staying. The next day after school, I went to his hotel and waited in the lobby for about 3 hours reading a book until I finally I spotted him. I approached him and said “Hi, my name’s Christian” We shook hands and I explained to him how long I had been waiting to meet him and he was pretty surprised and shocked to say the least. Funny, he actually recognized and remembered me from his birthday video. He then told me that he really liked L.A and he had visited here before and he was working on his album out here which will be released early next year! He says “It’s going to be a good one”, which we all know will be more than good. Then his friend took the picture of us (I couldn’t use my phone because it died on me) and I gave his friend my business card so he could email it to me, which he did. After, we said goodbye to each other and awkwardly walked away in the same direction lol but I turned into the subway station and got a final glimpse of him before entering.And that was my experience meeting Darin

the only thing that sucked was that because I had been waiting for so long, I was verysleepy and was half asleep while talking to him so it felt like a dream, nevertheless it was amazing 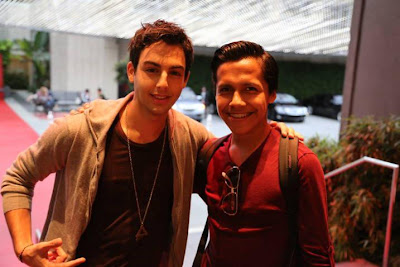 That's the proof that no matter who or where you are, nothing is impossible.