November 13, 2012
Darin visited Ola Lindholm's talkshow yesterday, called "Riktig talkshow". Unfortunately it won't be broadcasted on TV but we will make a summary of what happened just for you Darin Worldwide blog readers!

Darin and Ola had a little chat before Darin's amazing performance. They talked a bit about all the years that has gone by since Darin got famous, and that he has changed since then. Although Darin said that he was shy back then, and he still can be a bit shy in some situations. "For example a situation like this one" he said, like when he's being interviewed.

They also talked about the one thing that they have in common - their love for Michael Jackson. Darin said that he went to a Michael Jackson-concert many years ago, which was his first concert ever. The fact that Darin had seen MJ live made Ola very jealous.

Afterwards Darin sang a beautiful version of "I can't get you off my mind", which gave me and probably the rest of the audience goosebumps! It was even more fantastic than the studio version.

Unfortunately photographing during the show wasn't allowed, but luckily we found one photo to share with you! 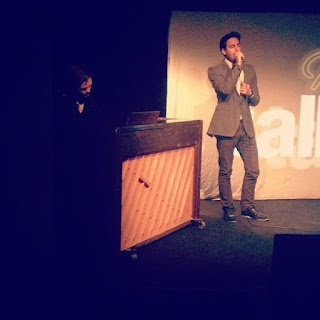 I Can't Get You Off My Mind Talkshow