November 25, 2012
Darin has got several charting songs this week in Digilistan, Swedish digital singles chart.
In the top 15 you can find all the songs he has performed in Så mycket bättre so far (apart from Magdalena which was released today). Astrologen is at the top. Then En Apa Som Liknar Dig is at number 2, I Can't Get You Off My Mind at number 3 and Stockholm at number 14.

To celebrate this "big" event, Swedish radio P3 has called Darin for a quick chat, asking him what was his reaction to that and why he thinks these songs have had such a great impact on the Swedish public.
Here comes the interview translated into english:


"Both #1 and #2 on the same chart, how does that feel?
- It feels great, it's incredibly fun that it works out so well and that people likes the songs and the show.

You've been at the top of this chart before, but that was with only one song. Now you have half an album, 4 songs, on top 20. For what reason do you think your covers work out so well?
- I've really done them in my own way. When I sat there figuring out how to do them I decided to do them completely in my style. I don't think that much when I do them, it just sort of comes naturally when I get up on the stage.

If we focus on the #1, "Astrologen", it's an old Magnus Uggla-song and it's 30 years next year, which is even older than you. Why did you choose that song?
- I listened to a few Magnus Uggla-songs and I got that suggestion. I felt like that song suited me very well and that I could sing it well, I also liked the lyrics and I felt like I could do my own version of it.

It's your first ballad at the top. Does that feel good?
- Yes, it really does.

Apart from Så Mycket Bättre, what is Darin up to right now?
- Right now I'm finishing my new album which will be released in January. I'm mixing and mastering it.

Will there be just your own songs, or the ones from Så Mycket Bättre, or a mix of those?
- There will be just my own, brand new songs.

In february you released a new song, the same week as the Melodifestivalen songs came out. So it didn't became a huge hit until in the summer. And now you're gonna release in the beginning of next year, how do you feel about that?
- I heard that you said that I released it at the wrong time, and you're actually right about that. I refused to give up on that song and it was great when it at last, after six months, became #1 on the digital singles chart. Then it was totally worth all the work.

This weeks #1, "Astrologen", is over 5 minutes long in the original version, but yours is just 3 minutes. How did that happen?
- I have to think about when I made it… It just felt right to end it at that point.

Now make a presentation of that song, tell us what we hear.
- This is my version of Magnus Uggla's "Astrologen", which I did the show Så Mycket Bättre. It's #1 on Digilistan this week which I'm incredibly happy for." 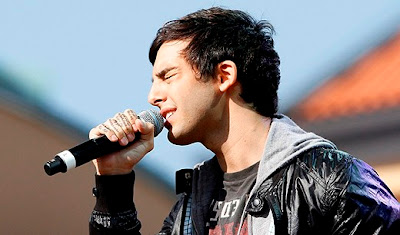