Göteborgs-Posten: "Darin has got an eye on his career" 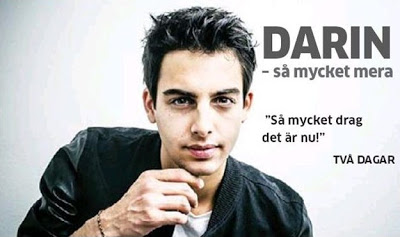 It is there as a Östermalmsborg from the past, the label's office building in the neighborhood Garnisonen. White walls, high ceilings and Elvis Costello in Warhol-colors above the capsule coffee machine. Mando Diao are combined with Mumford & Sons and the fact of the matter is that virtually any song that could scroll. The world's largest record company has absorbed virtually all competition and represent large parts of the world and the Swedish artist elite. Now Darin.

He has been hanging off his outdoor jacket on a chair and sits alone on a ‘spejsad’ armchair in a sparsely decorated conference room.
-          I recognize you!
-          Certainly from the Eurovision Song Contest, I worked when you were participated, I say.
-          I always remember the faces. No names, but always faces, says Darin as a few days ago landed after a major songwriting turn together with the elite of New York, Philadelphia and Los Angeles. Jetlagged and somewhat easily-prepared, but obviously happy and on board.

CROSSED THE ATLANTIC
25 songs he got together with the guys who write for, including Timbaland and he tells the story of the swift pace of writing, how professional pros really is and how good it feels to be able to make songs for a new album and know that there is something new, something cool, something he feels is 100 percent Darin right now. He just hopes his fans will like it. And why would not they do it? It is pretty all right for Darin right now.

-          Yes, it was nice to come home a few days ago and see what features it is around the program. My family, my friends, people in town, everyone seems to see it, he said.

"The program" he is talking about is of course ‘Så mycket bättre’ where Darin delivers famous cover versions one after the other. Along with his producer and the band he was always up for doing something special with their covers, Olle Ljungströms ‘En apa som liknar dig’ , for example in mid-tempo but stopped after Darin heard a cool sound on the synth like a real club tune. And many, both critics and audiences, have taken his versions to their hearts.

-          I check the Itunes list almost every day, even when I have not released something new, most of the interest in what goes on the charts. This morning, I was number one, third and eight, he laughs.

Darin had not seen a minute of the program when he agreed to participate, and when he came to Gotland, it appeared that no one else in the gang had any idea of the previous seasons.

-          The team had to tell us how we could do it, what would happen. None of us knew. I think it helped to make the program more enjoyable, and perhaps different than the previous seasons.

SILVER PLATE
Someone from Så mycket bättre-starting field usually always stands out and gets a real popular breakthrough. Last year, Laleh, first season, September and maybe it will be Darin this year. He himself is not sure and says that he agreed to participate for another reason: To show his real self as a singer, performer and songwriter.

-          There are probably quite a few out there that don't know, I write my songs, which they think I'm just one product that gets everything served on silver platter. I suppose it has with music style I engage in to do, conventional pop music, and I can tire of that so many people do not take it seriously, he said.
-          I've fucking worked and toiled.

Throughout his eight years and five albums long career, from the time he hit the age of 17 with braces in Idol for the 2012 Så mycket bättre, he has always made ​​his own decisions. About the music, which signal will be released, what clothes he should have, which he will write with and who will produce.

-          I go on gut feeling in my decision. I've learned that it's what always works best in the end. The times I have not done it, I have always regretted it. There may be a small punch line in a song shooting I was persuaded to pass, but which I felt didn’t work, and it still annoys me. 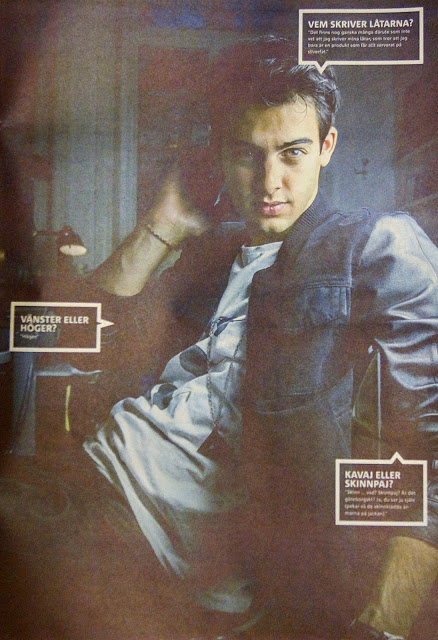 THE YOUTH WHO GREW UP
Just over a year ago, Darin decided to take more responsibility for his career. And perhaps most of all for his life. He made a clean sweep of all the partners, cleaned up properly and put himself in the role of manager. Went on business meetings with record companies in Germany, himself contacted songwriter and wanted this to prove to himself that he could take care of his own house. And, again, perhaps above all his own life. He had begun to feel a little too cherished and treated as the youth he actually was when his career started, but no longer.

-          I was 24 years old and felt it was time to grow up and stop being pampered. But to make up for a lot of what I had missed of my youth. I started to travel a lot, both alone and with friends, and it was incredible for me to do it, absolutely necessary for me to able to work on. Take care of myself and those who are close to me, he says.

The friends went with him are the same that have been around since childhood, he shows up five fingers and says he can count his close friends on these. Some others, he has not let up close and it is this handful of friends who have always been by his side, so even in this period.
He turns on itself in the armchair, turning his palms together and looks away for a little while. Smile at the claim that this was an "early-40 mid-life crisis" given that he had already done more than a normal 40-year-old in his career. Is not used to talk about it, do not feel comfortable talking about his lives in this way but still have to do it. It is close in time to receive but is one of the reasons why he is where he is right now. And then comes a revelation: He stopped singing.
There was a period in his life when he was not feeling really good, the transition was difficult and it was noticeable evident in that he stopped singing. Or not stopped, but still sang much less. According to him, a sign that he doesn't feel well.

-          It was actually the first time in my life I didn't sing. When I was three I started, and ever since then I have always answered "singers" on the question of what to be when I grow up. For a little while there was an astronaut, but it went over. Then I noticed that I sing a lot when I feel good and much less when I do not, he says.

Can it work as self-therapy? Can you sing happy?
-          Hm, I haven't thought about it, but of course, when I was in the Studio and recorded a song, like a calm and emotional song, which I have been satisfied with so I feel good.

But this time, when a year ago, he had to look and fight to get the urge and the song back and that was actually when he made it clear with the single ‘Nobody knows’ that he felt he was back.

-          I released it, nothing happened but I pushed on. I had decided that it would work and almost six months later, it was number one on Digilistan and sold platinum, he said.

And somewhere where we are now. The song is back, that voice which has always been Darin's big prevail against so many other colleagues, drilled and sanded as soon as he gets the chance. And in January a new album will be released, just in time to when "The Så mycket bättre wave" has subsided somewhat. If it makes it.

-          It was a wonderful thing we did there in Gotland, I have so many memories. Both happy and difficult and the whole period was extremely intense, we worked all the time and it was really only a few days ago, when we recorded the last episode, as everything ended.

FACTS
Name: Darin Zanyar.
Date Of Birth: In Stockholm on June 2, 1987.
Lives: Stockholm, Sweden.
Career: Participated in the very first season of Idol in 2004 where he finished second after Daniel Lindström. Four top 1 selling albums, a lot of top 1 selling single and platinum records later, and now he is in Så mycket bättre.
Current: In January 2013, releases a new album that is currently recorded in the United States.
Los Angeles or San Francisco?
-          Stockholm. LA is fun to work in, but I like New York better as a city. But still: Stockholm is best. This is where I live.
Coffee or tea?
-          Hm. (Quiet a moment.) Coffee. I don't drink much coffee but when I do it,  I do it black. In order to get better? Haha, yeah right.
Half Empty or Half Full?
-          What do you mean? A glass with half water left, it's half empty or half full? Okay, half empty. Is it good?
Night club or home night?
-          Right now a home night. I'm exhausted after time in the U.S. and would rather be at home on the couch than be at a night club.
Who writes your songs?
-          There are probably quite a few out there that don't know, I write my songs, which they think I'm just one product that gets everything served on silver platter.
Left or right?
-          Right.
Blazer or leather pie?
-          Leather ... what? Leather pie? Is it Göteborgskt (“Gothenburg language”)? Yes, you can see for yourself (pointing to the leather sleeves on the jacket).