Aftonbladet Plus: "Do you ever feel an adult?"

December 22, 2012
Darin's first hit "Money for Nothing" ousted Kent from the first place in the sales chart.

-  It was the worst thing. My cousins ​​are from Eskilstuna and they said "Shit, people are pretty down on you now", said Darin Zanyar and laughs.

What was it like to break though overnight?
-  It was crazy. Suddenly, I could not take the subway and walk around as usual. People recognized me. I usually started laughing when it happened because I thought it was so strange. Even today, when it happens and people act in a special way I laugh, I can't control myself.

I met Darin in a conference room at his record company Universal. He wears a white t-shirt under his green leather jacket, black jeans from Cheap Monday, shoes by Dolce Gabbana and a watch by Sjöö Sandström. Yes, he has a stylist. His necklace dangling three triangles in iron.
-  That's my name in Kurdish. No, I'm joking. I found it in London and thought it was amazing.


Darin Zanyar is 25 years old and adult. Orthodontic braces are gone (he had worn it for two years). On the bedside table at home in a residential there's Factory Girls, Leslie T. Chang's fiction book about China and the migration from the impoverished countryside to factories in the cities, which he has just begun to read.
In his wallet there is a patient card from a private health insurance company.
-  I think there are many people who will always see me as a 17-year-old guy who broke through. So is it for most of the people who break through in young age.

Do you feel an adult?
-  I feel in between if I have to be honest. Or this is how you feel when you are grown up. Do you ever feel like "now I'm an adult"?

-  I was nervous before going there. Shit, what have I gotten myself into? Should I live in a house with six other artists in ten days? It's a special thing.

The only one he knew was Magnus Uggla. They have toured together. Miss Li, he had just visited. Olle Ljungström he had never met.

-  I clicked quickly with Maja Ivarsson (of The Sounds). She's a damn nice person with a lot of energy and very funny.

Darin's latest album Lovekiller was released in 2010. Then there was silence. Then Darin went to Berlin. Then it got even quieter. First, in February this year, he released a new single, Nobody Knows. The idea was to release a mini-album in April, but he was dissatisfied with the result that the plans fell through.

-  I have those days, long periods when I write music. "It will be good, but not as good as it can be". That was how I felt. I scrapped all the songs except Nobody Knows and another one. I have come into a flow in the last few weeks, just as I had when I worked at the Lovekiller album. In one week Tony Nilson and I wrote half the album. Then we made Microphone, Lovekiller and the wedding song for Victoria. What has helped me in my career is that I write my own songs. I'm not dependent: "Damn, I must have a new hit" but I create them by myself or with the others.

After my interview Darin is going to Cosmos Studio, where Swedish House Mafia and RedOne, who worked with Michael Jackson and Jennifer Lopez, usually record.
Even in high school he was known as a music guy and performed every week for the other students. But after the breakthrough, Darin stopped being an ordinary teenager in many ways. When his peers went to house parties in the Stockholm suburbs, Darin went on promotional tour to Germany, Switzerland and Austria. Sometimes he just misses normality.

-  When I watched high school movies and heard about friends who were always partying, I thought it would have been fun to be there. I took it when I lived in Berlin, and it was really hardcore. Berlin was the perfect time for me to pull out and live life. I got a lot of new friends there who I still keep in touch with.

What are the sacrifices you make to get those 45 minutes on the stage that you love?
-  You are traveling a lot. Sometimes you feel like "Today it would have been fun to hang with the buddies." Sometimes it gets lonely on the road. Apart from that, it's fun. It doesn't feel like a job actually.

It is evident when talking with Darin that he loves his job and has every reason to do it. In an article from 2008, he said: "Sometimes I 'i-chat' (write text messages with a picture of the man you're talking with) with songwriter RedOne who lives in the U.S., and all of a sudden while chatting maybe Lionel Richie or Enrique Igleisas walks past the picture and says 'Hey Darin!'. Once it was some of them, like Akon, who just said 'Oh, I saw your video, it was great.' It's cool."

The conversation between me and Darin leads into Lionel Richie and his songwriting.
-  Ten years ago I got in a telephone interview the chance to ask the American singer how to write a love song. He replied: "It doesn't matter if you're a bulldozer driver or professor, every person sometime in life wants to hear those words - 'I want you', 'I need you', 'I love you' and 'Forever'".

Is it easier to write songs when you are newly in love?
-  If you write about being newly in love, it will be good. I tend to write about what I feel, whether I'm newly in love, hurt or happy. Nobody Knows is all about tough love. I ask questions - why does it hurt so much, why does it feel so good, why does my heart beat like this, why is it hard sometimes? The only thing I come up with is that nobody knows.

Are you single?
-  Right now I'm single. I met a girl when I lived in Berlin and I was with her for some time. She came here to Stockholm, I went there. She was German. It's been on-off, but now I'm single.

With Darin's breakthrough, fans started writing sex novels with the young heartbreaker starring as the protagonist, and they were published online. They also wrote stories in which Darin dies at the end. Some of the obsessions that his fans can show I discover when Darin, the photographer and I left the conference room to photograph the old Idol runner-up at the pond in the courtyard. Darin posing accustomed in front of the camera. It becomes very narrow eyes and arms crossed when he gets it started. And where we find Darin, there we find the ladies.
Out of nowhere two twelve-year-old girls come up, but they don't dare getting close with their mobile phones camera to search for his idol from behind a hedge. But a girl at age 25 in the white clothes of a caterer takes it all the way but turns into an awkward school girl to the singer's companion. She strains and scrapes with her foot.  "I met you in Arninge Centre last year, do you remember me? You probably have a lot of fans", she says in one breath. She asks for a picture. Darin is polite, courteous and charming.

Your job is an ongoing popularity contest. How do you handle artist industry's uncertainty?
-  You have to know that you can't always be on top, it doesn't work that way. It has to go up and not down. I run on wholeheartedly and don't do things until they feel good enough. It's clear that there is a little nervousness when I release and I wonder how it will go, but at the same time, if I think too much about that in that way, I get crazy.

THREE QUESTIONS
My best style tip for men:
Instead of following the trends and look like everyone else, you should were what you like.
Male model:
Kanye West is great, both style-wise and musically. It's nice with artists doing their thing.
Best advice to others who dream of an artist's career:
Start writing songs that suit your voice and send them to the record companies. If there's a time to do it, it's now.

SELF-PORTRAIT
"I tried drawing myself as a manga character. Hair and smile are the key. My look is not something I think about very often. If I have complex? Yes, of course, but I think most of other stuff. Hair has to be perfect. It should look like it has fixed itself "

In the end, Erik thinks that Darin has it. Ever since his breakthrough, everyone - from pundits to teenage girls - have talked about his radiance. So I say it to him. What does he think of what he has got? Darin is happy, but I can't put my finger on what it is, other than "It's not something I think about. I think everyone has their glow", he says. 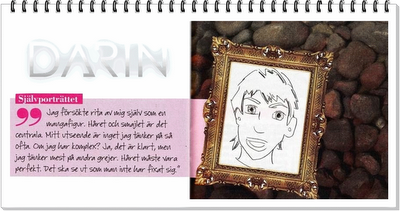 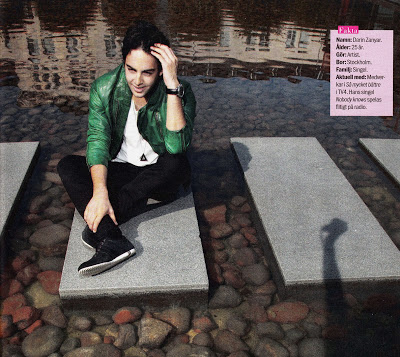 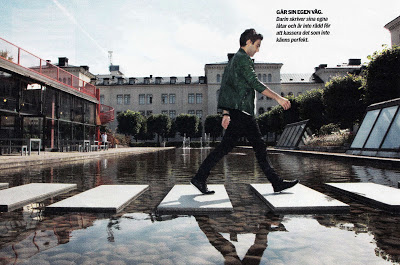