December 30, 2012
To appoint Darin to this year's September/Laleh candidate is almost an understatement. And the question is whether or not the young pop guy from Vällingby trumps both them and everyone else who has ever been in Så Mycket Bättre? It has never happened that a participant had so many people to sit and wait just for the interpretations of others' songs. Darin casts hit after hit of old beads and has dominated the iTunes chart for the last seven weeks.
-   I didn't think I wanted to make "hits", more that I wanted to do them my way. So I went into the songs and broke down as I would have done if they were my songs.

Darin was satisfied with the interpretations he had done, but had not imagined that they would become so popular.
-  I have done them in my own style fully and done what I wanted with them. Especially with En Apa Som Liknar Dig. I was a little unsure at the beginning if I would make it so house and about what would Olle Ljungström say, he laughs.


He says that both Stockholm and En Apa Som Liknar Dig sounded quite different from the beginning. They were both midtempo songs and Stockholm was not even close to that house version as now. "Apan" was only a little more Timbaland-style before the producer Niclas Bergwall played the intro of the current song. Then Darin felt that they should make a house version of the song.

Darin got all the songs at his first choice, but as for the mega-hit Astrologen, someone actually recommended it to him.
-   I liked it and it felt good to perform. But then when I sang it during the recording, I didn't think I had done it so well, so I was a little disappointed. But then I saw the TV program this fall, and I was really happy (laughs).

Uggla's original Astrologen is an ironic love song, but Darin has chosen to make it an ordinary and very beautiful declaration of love.
-  That's how I saw the song, so I removed the last verse. I wanted it to be real, it wouldn't suit me to make an ironic song I think.

And then this "poäm". Why don't you pronounce it as "poem"?
-  But it Uggla didn't either! (Darin takes out his phone and plays the piece in Uggla's original, and even Magnus pronounces it that way). I thought, well not so much, I thought it sounded good.

Darin said yes to Så Mycket Bättre because he wanted to show what he could do musically.
-  I think people do not really know what I can do musically, and that I have been so involved in my songwriting. It's the essence of my entire career, and that I could get into the show through my interpretations.

But he also wanted to show you a picture of who he is as a person today. That he's not the same shy and secure little boy who broke through in Idol in 2004.
- I just wanted to get in and be myself and I think that Så Mycket Bättre showed it up, especially in my episode.

Who was the one that came in and held you as you started to cry after you told about your family?
-   It was the house woman, one of those people who own the place and cook, and was always there during the recordings. It was really nice, and I hung out with them sometimes.

And I want to know what did you eat on your day? Viewers like us never know about that.
-   Kurdish food for lunch and then there was carpaccio as appetizer in the evening and then the main course, tapas. Everyone chose different things during their own day, Uggla chose tacos which were not easy to eat when you had TV cameras in front of you all the time. It was a little messy (laughs).

But you, what's up with Maja? The newspapers persecute you and take paparazzi pictures, it seems a little crazy.
-  For the moment we are friends, that's where it is. We flirted a lot during the recordings, so there was something happening there. But we are really good friends today.

On January 30, it's thought that Darin's new album will be out. It is recorded and ready so now only song order, cover art and such have to be fixed. It contains ten songs, one of which is Nobody Knows, but none of the songs have been played in public before.
Darin signed earlier this year a new publishing deal and went to the U.S. to work with different songwriters. He has worked with one of the Timbaland's producers, Jim Beanz, who's behind Nelly Furtado's "Loose" and Britney's "Blackout".

-  It was him who came up with the "It's Britney Bitch", for example. He is unbelievably amazing, and in five days we wrote six songs. We just clicked and we got an incredible collaboration. It sounds very good, modern and cool.

Recently, Darin also completed a song called Surrender over Skype with the Londoner producer Sacha Starbeck. Sacha has worked with Adele and in his studio there's the piano which she played Someone Like You on.
-   So we wrote this song with the same feeling, a very nice song. It has a narrative that is incredibly honest and beautiful.

But it is not the next single?
-  No, it will be a tougher uptempo song which is harder and sexier than Nobody Knows.

When we photographed Darin for the cover of our April number, Nobody Knows had just been released and he would have released an EP, but something happened.

-  I was not happy with the music for it, it didn't feel like who I was as an artist like today. I go a lot by gut feeling and it wasn't the right decision to release the songs then. There are a lot of great songs that I've done and hope to give them to other artists. But I must take it later.

Which song do you think is your biggest hit?
-  Hmm, hard... Everybody thinks that the greatest is probably Step Up, but the best-seller so far is Nobody Knows. It's because it has had so long life. The single was released in February and then went up to number one on iTunes and Digilistan six months later. So it had two lives and I'm glad we stuck it out and drove it to Allsången, so it had the success it deserved.

All right. So. Melodifestivalen. When?
-  As I said before, I do it once and that's fine ... but you should never say never.

But you can't just be in it once with a ballad! Everyone wants you to be in the contest and sing an uptempo song.
-  Is that so? But I don't feel like I'm really there as an artist right now. Now I'm focusing on the album and abroad.

Well, do what you want. I think you should be there with the right song and win, so we we will be all happy.
-   (Laughs). That said, we'll see, but right now it doesn't feel like I'm close to that as an artist.

Finally, you are nominated in two categories for Gaygalan 2013: Artist of the Year and Best Song with Astrologen. How does it feel?
-  Oh hell, what fun! It makes me very happy of course. And I hope I can get to the gala this time as well. 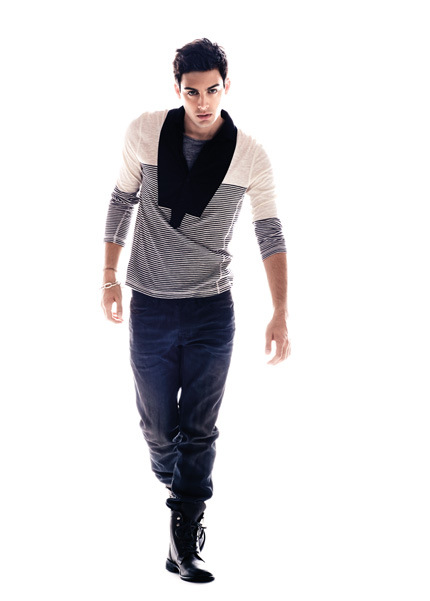