December 28, 2012
On December 25th, this Tuesday, the Chrismas Episode of Så Mycket Bättre aired on TV4.
It was time for a reunion, to meet up, to talk about everything that happened during the 10 crazy days in Gotland. To remember the best moments also by looking at the performances.

Darin arrived to Bromma airport, he was going to meet up with Maja when she had landed. While waiting he decided to buy a gift to Maja, it ended up with a box of chocolate.
When Maja finally walked into the arrival hall and saw Darin, she was so shocked and surprised to see Darin that she bursted into tears. They hugged and just said how happy they were about finally seeing each other again.

Later on Darin arrived together with Maja and Pugh to the place were the dinner would be hold. Magnus and Sylvia were already there, and soon after Darin's arrival Miss Li fetched up.
Saadly, Olle couldn't make it. He called Magnus and said that he was lying in the bed, feeling very bad, but he did send his best regards to all of them. Every one had been looking forward to meet Olle again, so they felt a bit sad about don't having Olle there with them.


The dinner didn't include any new performances, they just watched old clips from this summer in Gotland and discussed how it had felt to do their own versions of the songs.

Darin said that he had been very nervous about the performance on Olle's day with En Apa Som Liknar Dig, just because he had changed it so much with the up-tempo speed, the beats, but when he realized that Olle liked it, he got very happy.
He also said that he was very surprised over his breakdown during his own night, but talking about his parents struggle through life, travelling through so many countries trying to escape from Saddam was a very rough subject.

They also showed some clips with Maja and Darin flirting. Darin got very embarrassed, Maja was blushing but said (as we know) that she hoped they could be more than friends. Even Sylvia told that she often gets questions about Darin and Maja's relationship and what their status was like.
To end the embarrassing discussion including Maja and himself, Darin just said: Next clip, please!

The night quickly passed by and the participants had a very nice dinner with food, drinks, laughters and nice clips from the great ended season. 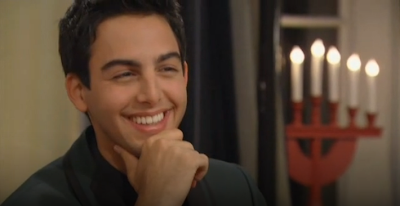 Despite our attempts, we haven't managed to upload the video in a good quality this time. However, you can both have a look at our photogallery from the episode on Facebook, and watch the full episode here.