December 09, 2012
After six weeks perfoming songs from the other contestants, Darin finally had the chance to rest and watch the others interpreting his biggest hits.
Darins dag started with Darin talking, saying that he is not used to living with that many people, but he likes it. He also said that it is his day and feels like it's his birthday. Pugh and Sylvia came to him with breakfast in the morning, a very small breakfast containing an egg cup of coffee and a slice of orange.

Their first activity was to paint a wall of a gas station. Darin said that he wanted to give back to the local population by doing that. While there, they all cooperated and painted on the wall. Darin explained that he wanted them to do a landscape, sort of a meadow but also with buildings and so on. He painted a bird, among other things. Then he said that he has always been into art and drawing things. They ended it all by drinking some champagne. 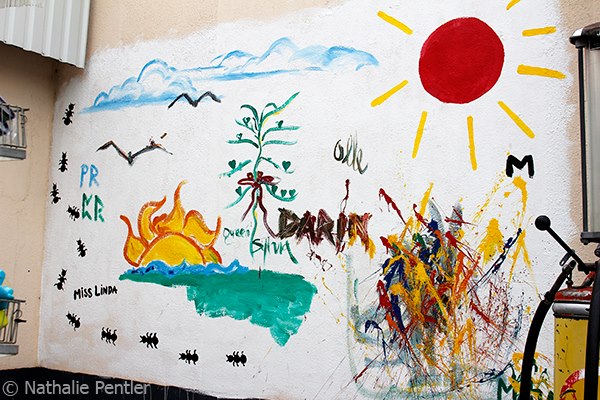 Back at the house, they recorded a bit in Darin's room, which was very messy, he admitted. It was time for lunch and they ate some kurdish food, whose recipes were given by Darin's mum, Ashti, who is a great cook, he said.

After that, Maja started with singing a rock version of Want Ya!, which Darin thought was great. He said again and again that she's a cool girl and it was a cool version.
After Maja's performance, they talked a bit about Darin's childhood and when he actually started singing. They showed a few videoclips of him singing as a child. He said that singing has always been his passion and that he had a microphone singing in which he picked up radio signals from airplanes that he heard. Darin also told them about the time that made him realize that he wanted to work with music, which was when he and his sister Rosa was in Stockholm city and found a stage placed there where they could sing karaoke. Rosa convinced him to get up and sing, so he did. The place soon got very crowded and he saw his sister standing in the middle of the audience crying. Darin said that this was the first time he realized that people actually thought he was good at singing.
Then it was Olle's turn to sing Who's That Girlwhich he made a little more uptempo than the original. This impressed Darin: he said he had never thought that Olle could do the song that way.

Afterwards they talked a bit about Darin's time in Idol 2004 and showed the videoclip of his audition. He told them about the time when he passed to the finals with an amount of 78% of all the votes. He also said that he was very disappointed when he came in the second place, but already the day after he got offered a record deal, so he got happy pretty soon again.
At last it was Pugh's turn to sing, and he did a reggae version of Money For Nothing which Darin thought was very cool.

After lunch they went out and did a cooperating thing again. They were supposed to drive a special car, it had two steering-wheels, one on each side of the car, and an accelerator and gearbox on one side. So one person sat on one side of the car, steering, while the other person sat on the other side accelerating and gearing. Darin did it with Sylvia and Maja, and it didn't went that well for them. Darin said that he drove a little fast and Sylvia got scared so he needed to slow down. The other participants watched and laughed at them. After them it was Magnus Uggla's and Pugh's turn, and it went well for them, they drove very fast and quite good. At last it was Olle's and Miss Li's turn, and they had a hard time getting the car going. Darin and the others seemed to have very fun and laughed hard.

Before dinner Darin told them about one time when he was out touring together with Magnus Uggla and Lena Philipsson. He had braces then, and between two songs he was supposed to change jacket. While he was taking off one of them it got stuck in his braces and he didn't get it off at first, but at last he could change and get up on stage.

At dinner they talked about Darin's parents and their escape from Iraq. Darin said that his father was asked to join Saddam Hussein's army, but he decided to escape the day before. The next day he found out that all his friends at home had been killed. Shwan and Ashti had a very hard time and escaped from country to country during a long time until they at last, July 11th in 1982, got to Arlanda airport in Stockholm. This was very hard for Darin to talk about, and he started crying and needed to take a break. It was an heartbreaking moment.

During the dinner Miss Li sang Lovekiller, Magnus Uggla sang You're Out of My Life, translated into Swedish, called Försvinn ur mitt liv and at last Sylvia sang Step Up. Darin appreciated all the songs and he felt honored for all those big artists singing his own songs.
They also talked a bit about Darin's fans, and he said that he appreciates being a girl idol, but that it could become a bit too hysterical some times. He also said that in the beginning he also faced a lot of haters, which was hard for him. But he decided not to listen to that and just go on.
At last Darin did a great duet together with Maja, singing Want Ya! all over again.

If you're interested in downloading or streaming Darin's songs performed by the others, they're available as always oniTunes Sweden and Spotify. And don't forget that you can always have a look at our fantastic photo gallery from the episode on Facebook.

This time there are no Darin performances to watch, but you can stream the full episode below in high quality and with subtitles in english! The translation may not be 100% accurate, but this is the best we could do to make you enjoy the show as much as possible.