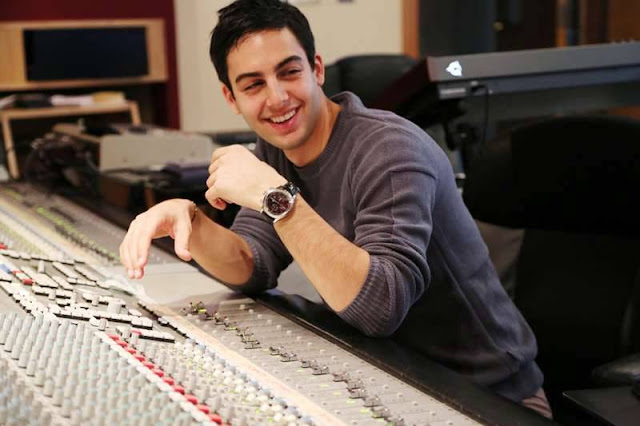 25 new songs became the result of the USA trip, and nine of them will now be shown in exclusive video clips on nöjesbladet.se. During the recordings Darin worked much with the American songwriter Jim Beanz, who has cooperated with a bunch of worldwide artists.

DARIN OPENS THE STUDIO
Now he shows exclusive clips from the recording on Nöjesbladet's site.
Come with Darin into the studio when he records the new album "Exit". Today nöjesbladet.se shows exclusive video clips during the work with the songs - the most personal he's ever done, according to himself.
- I felt that I wanted to get some things out of me that I've been through, he says.
The 30th of January "Exit" will be released, but already today Nöjesbladet is starting to show exclusive video clips from the album recording in the USA last autumn.

- I'm excited to show how the creative work with the album really works, instead of just describing it with words, says Darin Zanyar, 25.

Flies over LA
The clips shows mostly the work in the studio when Darin writes music and lyrics together with the producer and songwriter Jim Beanz who has worked with artists like Justin Timberlake, Nelly Furtado and Timbaland. But as a viewer you will also get a taste of the songs - and a look at what Darin did when he wasn't in the studio. - For example we recorded when I went by helicopter over Los Angeles. It was a thing I wanted to try, he says.
"Exit" is Darin's sixth album and he describes it as more personal than ever before. - It's about me and what I've been through. It felt like it became stronger then. And that people maybe can relate to it, he says. Like what, for instance?
- It's hard to tell exact, but it's all between hard relationships to when you're in an awesome mood and want to enjoy life. He describes the songs as "all between sexy dance songs to very deep and fine". - My favorite is "Same old song". It's about a tough relationship where you feel like you can't get anywhere.

Darin about...
...the album's first single "Playing With Fire" which will be released January 18th:
- It's about a flirt which the girl maybe takes a bit more seriously that I do.
It's not about someone special, it was just a nice lyric we wrote.
...that TV4 blows life into "Idol" again:
- That's good. Right now I'm in Berlin so I don't know much about that. But we will see how things turn out.
...his relationship to the "The Sounds" singer Maja Ivarsson:
- We're just friends, but unfortunately we don't have time to see each other that much.