January 29, 2013
Darin was a guest in today's Rix MorronZoo, a programme on the Swedish radio Rix FM. Here's the conversation they had with Darin. 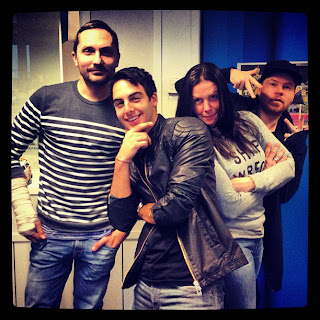 Welcome, Darin!
Thank you so much!

How are you today?
I’m fine, thank you (laughs).

That was a stumper. Darin is a bit unwell today.
Yes, I think there was something I ate yesterday...


So you could say you're crummy in your tummy?
I don't know yet...

Do you want us to get you a bucket for you?
I'd love that!

Well.. When you are at dinner, are people expecting you to act like you’re in Så Mycket Bättre and get up and sing?
Yeah, ring in the glass and like "Now I’m gonna perform a song..."

You’re so arranged!
Yeah at least I was yesterday...

Now I have to ask... Do you think that Petra Mede hosting the ESC was a good choice?
Yes I do. I haven't heard her talking in English but I think she’s hilarious.

So, who is Darin?
It feels like Darin has owned the whole Rix FM lately. With "En apa som liknar dig" and "Astrologen" he has also given Olle Ljungström and Magnus Uggla some money. I think that Darin got publicly loved for real thanks to Så Mycket Bättre. Very famous and the girls' Darin he was already before, but now he is also Barbro in Falköping's Darin. And do you know what? It’s 9 years ago mr Zanyar melted thousands of girls' hearts in Idol. Now, he is a 26-year-old true artist who obviously has found the exit. Because his new album is named "Exit" and he has written it with some of the world's most successful songwriters. The question is - what does Darin want to get out of? Has Sweden became too small?

So.. Is Sweden too narrow to you?
No. On the other hand I’d like to try out some new territories. But I don’t think it is small.

Where are you aiming then? Germany?
It will be pretty mixed. I like Germany. But we will see where I'll start out. I'll take it step by step and don't do everything at once.

The album is out tomorrow?
Yes!

And what can you say about it?
It’s called "Exit". And the thing was that I trashed my last album, because it didn't feel like the right style. And I'm very glad I did because otherwise I wouldn't have this album. Half the album I wrote in 5 days, in Philadelphia. I had never worked with Jim Beanz earlier and I thought - will we click? will this work out? But we wrote 6 songs in 5 days and 5 of those songs are on the album, so... It was a very good week.

Some would maybe say that you can’t write good music that fast. What do you say to them?
I don't agree.

Dolly Parton actually wrote "9 to 5" and "I will always love you" on the same day.
She did? For real?
Yes, she did.

Darin, I've heard you are scared of flying.
It’s actually much better now. I’m not as scared as I was before.

That's strange. Or is it for safety? Because you get in the car and then you just drive and never stop.
Sort of. I got to borrow my cousin’s car the other day. He was like "you can drive now" and I said "I haven’t driven in a long time but okay" and then I just drove and felt like I didn't wanna stop. If he weren’t there I just would have kept going.

There is a story about when you get in the car and only are supposed to go and buy some milk, and you feel like "What the f*ck, I’m going away". Where did you go then?
Well, where didn't I go. I started going down to Skåne, then Denmark, then Germany, Belgium, Germany again, France, Monaco, Italy... And then I don't know where I was, I was somewhere in the Alps.

Wow! And you had the same underwear the whole trip...
The thing was that it was in April, so it was really cold in Sweden. The farer down I went, the warmer it got. So when I arrived in Monaco there was almost 30 degrees that day. So I went to a store and bought shorts and a t-shirt. I didn't bring anything, so...

Spontaneous vacation... Do you like the car driving or the lonesomeness? What are you looking for?
Both.. It's a good way to get to know yourself, just clear your head.

What are you listening to when you drive?
That time I brought Nelly Furtado's album "Loose", it had just been released. It's funny because it's Jim Beanz who wrote all the songs on that album.

Darin has a "police message". This is very important. We turn to you, the one who's listening right now. Darin had a memorable moment in his career when his sister asked him to get up on a stage on Sergel's torg in Stockholm. This was before he even knew he wanted to be an artist. And this was when he really made up his mind.

Exactly. I think I was 15 years old then. (Darin goes on telling the listeners about that time when he sang ”If I could turn back the hands of time” by R Kelly and there were so many people listening to him, in 2002.)

So, the thing Darin wants is a video clip from this event.
Yeah, and I know that they recorded it because there was a screen on stage.

Who has the material?
If you have it, you can get in touch with us. The one who gives us this clip will get a signed copy of Darin’s new album.

Anyway. You were in Niklas Strömstedt’s show Tack för musiken. It was very good to watch.
Thank you, it was good being a part of it. He hadn’t prepared me for the questions and stuff so I thought "what are we going to talk about in 2 hours?" But afterwards it felt like it just had gone 20 minutes.

In the show we got to hear your interpretation of "Eternal Flame".
(the song is played)

Darin, good luck with the album! It's released tomorrow, as we said. And don't get any crazy ideas and go away.
No, I promise. I won't do anything like that before the tour. April 17th I'll play in Stockholm, in Cirkus. Then Gothenburg the day after, and Malmö the day after that.