January 16, 2013
Last fall, he ran through the TV screens - again. Now it's time for Darin to show that he is more than an exceptional cover singer. New single "Playing With Fire" is a superb start.

That Darin was the musical winner of the third season of "Så Mycket Bättre", there is no doubt about it. His career was also a commercial shot - two of the interpretations of the autumn TV show are still in the top ten on the singles chart. "En apa som liknar dig" is still the country's most streamed song. The 25-year-old boy is still a talent beyond the ordinary.
And speaking of commercial - Darin's new single sounds like an obvious hit, as if it is ready to take over the charts. Not necessarily just at home.

Darin has always surrounded himself with talented songwriters and producers. Already on his debut, the "Idol" finalist was working with names like RedOne, Robyn and Max Martin. On "Playing With fire", he works with Timbaland's companion, Jim Beanz.
The result is a pop song that finds its way to the dance floor, which is more reminiscent of the club songs on Usher's latest album than Justin Timberlake fresh r'n'b flirt "Suit & Tie".
It is an overpopulated genre where it can feel like it is going thirteen Chris Brown -dozen copies, but Darin has a confidence and a newfound poise in his voice that shines through.
An extremely catchy strength. 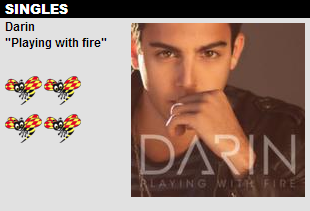 FOOTNOTE: "Playing With Fire" is released on Friday. The album "Exit" will be out on January 30.