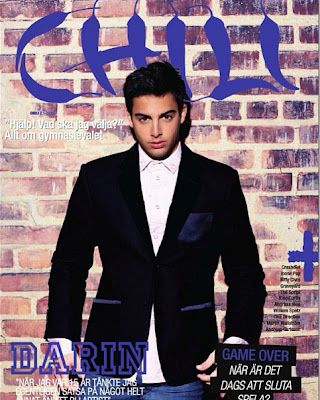 "When I was 15 years old I was actually going to go for something completely different than artist, like being an architect or a doctor".

10 years ago he was not many hours from choosing the natural science program. But on the last day of application he changed his mind - he really wanted to go for the music. Since then he has came at 2nd place in Idol, released five albums (soon is the sixth "Exit" out), competed in "Melodifestivalen", toured around the whole world and made a huge success on the tv show "Så Mycket Bättre".

He is sitting in an armchair at the record label and says he just has woken up from a power nap. In the background various music is playing and he checks his phone at regular intervals and changes song.


During the autumn Darin has been in the popular tv show "Så Mycket Bättre" and made success. Every single one of the songs he has interpreted has ended up at top 10 and the television viewers really seem to appreciate his careful and pretty cute image. Darin himself is very happy with his participation. But he reveals at the same breath that it was a huge deal to say yes.
- It wouldn't have been as obvious to say yes if they had asked me to participate a year ago. It's not like you just can get up and sing. You expose yourself very personally and it's very intense to be there, he says and smiles carefully. Because if there's something Darin has avoided it's floodlights on his personal life.

Especially the first years after he had gotten famous thanks to the tv show Idol. Darin was 16 years old and ended up at second place, although he didn't have time to get depressed too long, because already the day after he was offered his own record deal.
- It was hard in the beginning because there was so much happening and it felt that media always looked for something to write about. I wanted to avoid headlines, so I shut myself in and didn't go out that much. It has became better now after a few years, I've landed more in myself and am more comfortable, he says with a smile on his face.

He has always danced, sang and performed. Ever since he was a little boy he has wanted to stand on a stage and sing in front of a huge crowd.
- The nice thing is that my parents only thought that it was fun and entertaining. they have always been there for me. I really have awesome parents who's always supported my dream. It's not a job that's secure, he says.

In school he had very good grades and easy to learn.
- I could have kept going for the academic way, but my parents have always said that I should go for what makes me happy. I probably had gone for the music even though they hadn't supported me, I simply wanted it too much.

When Darin was 14 years old he got his first aha-experience on stage. He had been in the city (Stockholm) with his sister and on their way home they saw that there was a stage on Sergels torg where you could sing karaoke. His sister pushed Darin to get up and sing, which he also did. The choice was R Kelly’s ”If I Could Turn Back the Hands of Time”. In the beginning barely no one stood in front of the stage, but the more words he sang, the more people stopped to listen.
- It was magical! That was the first time that I got the feeling that it really was what I wanted, something I really wanted to go for. I still have that feeling when I get up on the stage, when I loose that I’ll quit, he laughs.

It shows that he really loves music, and especially to stand on the stage and perform his own songs.

As we already mentioned he had incredibly good grades in intermediate school and was responsive in his studies. When it came to his choice of gymnasium he first chose the natural science program.
- When I was 15 years old I was actually going to go for something completely different than artist, like being an architect or doctor. But I changed my mind on the last day of application and instead applied to the music program. That was the dream and what I wanted to do, at last I felt that I wouldn’t be happy if I didn’t chose the music.

He explains that he didn’t want to think ”what if?” and regret that he didn’t try for 110 percent. Already as a 14-year-old he started to write his own songs. And his remaining teenage years was maybe not completely normal depending on that he got famous over one night. On the other hand those years have consisted dreams parallelly with hard work to make them come true.
- Actually I’ve never had any teenage revolt. I was in the same way as I am now and I’m nice overall, he says and gives us a smile that could make any parent melt.
He agrees that his own teenage years weren’t like the average.
- I started working hard when I was 16 and have kept on going since then. It was unreal, and it still is. To fly over to the US and work with incredible producers is so damn cool. But I don’t think about it that often, I just go on working.
Simultaneously he didn’t have time to do all that stuff that his friends did.
- My friends went to school and to home parties, that wasn’t anything I could do in the same way. Mostly I didn’t have time, but it was also hard to go out, especially around people in my own age. It went hysterical easily.
Above all he refers to when he just had gotten famous.
- It seemed like people either loved or hated me. I had a hard time because of that, if I went out and people shouted bad things. As I have said before, a word can hurt more than a punch. Both parts was too much to take in as a 16-year-old.

Now he is 25 years old and has released five albums and is working on his sixth album, Exit. One big thing that people may not have noticed, but have been huge for Darin, is that he 2 years ago fired everyone he worked with.
- It has happened much personally, after my last album it felt like my life was taken care of by others. It got too much, I wanted to feel that I could make everything on my own. It has been a lot of work, but I’ve succeeded to have sessions with record labels, I have made deals and fixed everything on my own. Even though I haven’t been seen that much two latest years I have worked incredibly hard.

Among other things, Darin has worked in New York with the producer Jim Beanz who’s worked with Timbaland, Justin Timberlake and Nelly Furtado. He has also been in Los Angeles and worked with Madonna’s producer.
- The truth is that he actually had finished an album, but he trashed it in the last minute, and that’s when he started working with the people mentioned above. In the end it felt like it wasn’t the right songs for me, they didn’t fit. It was a hard decision to make, but I went for my gut feeling and I’m glad I did. Now I’ve found a sound that feels like my own, it’s more personal.

As a result of the new album Darin will go out on a tour and he says that there’s a lot of stuff going on both in Sweden and abroad.
- There are pretty many plans and dreams right now, but I don’t think that much about it. I just keep going.
And he is very sure about how long he is going to work with music.
- As long as I can challenge myself and think that it’s fun, and so far I get the exact same feeling of being on stage.