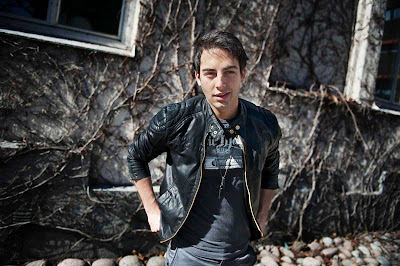 He has just released a new album and will soon go on tour. But Darin has became so famous that his fans doubt on his identity.
They come up to me and say that I look like Darin, he says.

From "Idol" to "Så Mycket Bättre". Darin is the man on everybody's lips. But Darin tells Nöjesbladet that people doubt that he is Darin.


JOKES AND AGREES
Sometimes people don't think that it's me. They come up to me and say that I look like Darin. When I say that it's me they don't believe it. Sometimes I joke and agree with them.

What is it like being so famous?
- I never get used to it. I always get shocked when seeing myself in a magazine or on TV. Which might be a good thing. I probably never will get used to it. But you have to be prepared for that when you get yourself into something like this. For me it's so important to remember why I do this. The central thing is the music, it's what builds everything. All the other things just come along.

Darin's latest album, Exit, was released in January and got to number 1 on the album chart right away. But the journey to that point hasn't been only a bed of roses.

PERSONAL LYRICS
- I was going to release an album last year, but I trashed it since I wasn't happy with it. So it feels good to release Exit. It's great that it has got so good critique and that the fans like it.

Darin has earlier described the album as uncovering.
- Earlier it was difficult to write such personal lyrics, but it felt kinda natural now, even though it was sort of uncovering.

On April 17th Darin is going to play in Cirkus, Stockholm. That will be the start of a small tour to Gothenburg and Malmö which later gets followed by around 20 gigs this summer.

Here's Darin's three favorite gigs:
T-centralen, Stockholm, 2006: "They turned all of the lights in the central station down and builded a giant stage, really cool to play in a place that is so unexpected".
The Dome 43, Hamburg, 2007: "By that time it was one of the biggest places you could play on in Europe".
Sommartorsdagarna, Borås, 2012: "There was such a great audience there, everyone sang the songs with me".