April 15, 2013
When I met Darin last week, he wasn't just reading a magazine about himself on the cover. 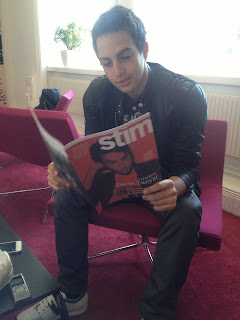 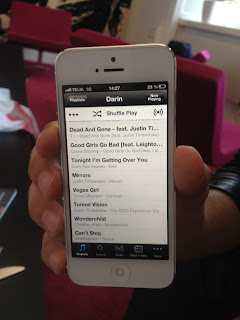 Note that Darin is listening to Darin. 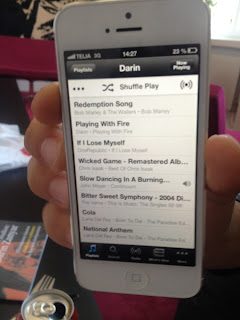 But the best of all, was that I got to borrow a tunic that Darin received from a superfan in Ukraine. 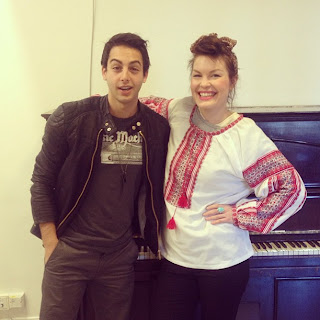 I just got it in the mail, from a fan in Ukraine. This is certainly nice, don't you think?, he said.

Anxiety, losing weight and age crisis. Darin has left a difficult period behind him. To Allt om Stockholm, he talks about what led him to break the pattern and be proud.
- It felt like it wasn't just about me, says Darin.

Darin Zanyar is sitting in an armchair at the record company, listening to John Mayer on very high volume and reading through a magazine. The cover is decorated with his own face. When we look at the pictures in the interview, I can't help but comment on how confident he looks nowadays. Above all... older.
- It's because I have three days of beard stubble there, then I don't seem to be 20 years older, Darin laughs.

He is in a happy mood. Beard stubble or not - it's more than facial hair that changed Darin the recent years.
- I had an age crisis when I was 24, and felt - No now I'm close to the 30th. But a year later, it was over. I began to feel that I actually have done good things, he says, and smiles.

But what was it that really happened?

SPEWED OF NERVOUSNESS
In 2010, Darin participated in Melodifestivalen, and reached the fourth place with the song "You're Out Of My Life." An honorable position with a very high price. In his summer talk in P1 - the same year - Darin told the press that the competition meant: losing weight and serious panic attacks.

- I woke up at the hotel of nausea and vomit from nervousness every morning.
In one week, Darin lost five pounds of weight.
- The press made ​​it difficult to eat. I was weak and dizzy, and was terrified to start throwing up in the middle of an interview or during rehearsals, told to "Sommar".

2011, the year when he turned out 24, was unusually quiet about Darin. Then it became easier - and so much better.

HAD A HARD TIME TO LET THINGS GO
Darin drummed nervously on the table when I ask how he did to get out of the difficult period. He hasn't been in therapy, but seems still like he thought a lot about why things turned out the way they did.
- I think and want at the same time. But I've never had anxiety for an album. It was in Melodifestivalen, a very different situation, he says, and turns on himself.
It's simply that it hasn't been in the work of the newly released album "Exit".
- To work with the mixes, it's a quite advanced process. That's what I found hard to let go from me, he says.

But the fact is that Darin actually got better, daring more.

I WASN'T HAPPY
Darin already knew that he was good. But it was in the successful program "Så mycket bättre" that he finally received a wide recognition for his music. It was also there that he finally got the courage to - even if it's just a few millimeters - let go of his control needs.

- Usually I don't show up things that I am not entirely happy with, I'm a erfectionist. But in "Så mycket bättre", it felt like it was not just about me. I wanted of course to be pleased, but I wanted most of all that the artist who made the song was going to be like that, says Darin.
And it was worth it taking risks.
- I really didn't think that the song "Astrologen" would be so appreciated like it did. I wasn't happy with it. And "En Apa som liknar dig" I just felt "Shit, this might be too much," because it was so hard produced. But my thought was to make it into my style and not just adjust me, he says.

LESS DANCING - MORE MUSIC
Darin shows up his iPhone. The latest listening on his playlist isn't just Justin Timberlake, John Mayer and Lana Del Ray - but also his own song "Playing With Fire". Darin has learned to be satisfied. A very good qualification now when he will go out on tour with his material from the new album "Exit".

- I have quite a lot of energy, I don't know where it comes from, but that's what made me keep going these nine years. Just keep working on and writing songs, he says.

What is the difference between the upcoming tour, if you compare it with the one you did last year?
- There will be less and less dance, and more and more music. I want it to sound very good live completely, and I have an awesome band with me, he says.

When you look back to this year, can't you be angry that it took you to interpret other artists' songs to get a real recognition?
- No. I have released four records and written so many songs, both to myself and the others, but then, not everyone knew about my musical side. So it was nice to show it in "Så mycket bättre" I felt "How nice that I get to show off what I've done", he says.

Since that time when the pictures were taken for that magazine cover that Darin was on, he has shaved off his beard. He looks very confident, anyway.

DARIN ZANYAR
Age: 25 (gets 26 in this summer)
Family: Single
Lives: Östermalm in Stockholm
Occupation: Artist, songwriter
Current: With the album "Exit" and spring tour - the first one at Circus on April 17.

DARIN ABOUT:
Preparing to for a tour: I usually chill with the band, sing up, jump a little. And we do the wave to pep the band.

His raider (a list of demands to the lodge): It says fruit, chips and candy. Redbull, if I'm tired and beer I drink afterwards with the band. It's really important to have good people with you. We usually hang out, on our spare time and go out sometimes.

The alleged flirt with Maja Ivarsson: We haven't talked for a very long time actually. That's it.

Darin's 3 favorite restaurants:
Italiano Papa – They have good food, and I love food. I usually eat carpaccio there.

Debaser i Humlegården – I usually eat their toast skagen, it's so damn good.

Ljunggren sushi i Brunogallerian – They have a spicy tuna that they cook and fry with a sauce. Oh! It's too good.