Go'kväll - Darin: "The weather is something that affects me"

April 28, 2013
Two days ago, Darin was a guest in the evening program Go'kväll where he performed two songs from Exit: his new single Check You Out and the powerful Surrender. He also had a conversation with the people around the table, so here it comes translated into english. 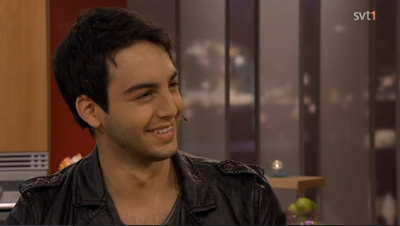 Welcome, Darin!
- Thank you very much!

It's your premiere at Go'kväll.
- Yes, it's my first time.

I was almost sure that you had been here once before, but you haven't. It's nice to have you here, finally!
- Thank you, yeah, finally I'm here.

Darin, what do you like the least about yourself?
- Ehm.. I'm very very tired in the mornings. I'm not a morning person. So it's hard for me to wake up early in the morning.

Do you stay up late at night?
- Yes, I'm a night person. I'd rather stay up pretty late, doing different things, like writing songs and stuff. That's fun, I think.

The host says that Darin and the other guest (Susanna Alakoski, author) have things in common, like they both have been through a big life journey.

Susanna: Yes, I think that we have more in common than people know about.
Darin: And that other thing you told me about...
Susanna: Yes, when I saw Darin I got a flashback of many years ago, when he was in Idol. My daughter was 12-13 years old back then. And she and her friend went all the way from Värmdö to Råcksta. There they looked for your door, and they hung out outside your hot dog-stand.
Darin: (laughs) Right, Råckstagrillen.
Susanna: I was like, what have you done? They said: We were gonna meet Darin!
(laughters)
Darin: It's very fun to hear!

The host: Have you ever thought about how your life would have turned out if you hadn't been in Idol?
- I think I still would have been working with music.

On this level?
- That, I don't know. But I started with writing songs to other people, that's how it all began. I don't think that it would have gone as fast as it has gone now. It was the first year, too. Anyway, I definitely think I would be making music, but I don't know if I had been where I am today.

Didn't you have any alternative career? Something else you could have done, if you weren't working with music?
- I went to a music gymnasium. So I had already made up my mind.

You released your sixth album in January, and then I read that you get very affected by the weather when you write songs?
- I get really affected by things around me while I'm writing. The weather is certainly something that affects me, but also other things too.

What was the weather like when you wrote "Check You Out" that we're gonna hear soon?
- "Check You Out" was in LA, so it was very sunny and happy. So it turned out to be a happy song!

The full interview in Swedish is available to watch online here. If you only want to watch the performances instead, you can switch to minute 14:18 for Check You Out and 40:20 for Surrender.

Translated by Nathalie Pentler.
Check You Out Exit Idol interview