Musikplats Stockholm interview: Darin's new album is out in September

March 27, 2015
During this morning's interview at Musikplats Stockholm, Darin finally revealed when his seventh studio album will be released.

In the previous weeks both HES and Di Weekend had announced it would be realeased this fall. Now we can tell for sure that the album is scheduled for release in September! We still don't know its exact release date and title, but we know for sure that it's going to be entirely in Swedish. Here's the interview in English:

Welcome, Darin!
“Thank you so much!”

Could we say that you go back and start from scratch? Or how should we interpret this change?
“It feels a little bit like that, since it’s a brand new style and language. I’ve never written songs in Swedish before, so that feels very new. There are many new things going on: I’ve got my own record label now, I release new music by myself, we record everything live in a different way than before. It feels a little bit like I’m releasing my debut album.”

Where does this change come from, what’s the background?
“I named my previous album Exit, because I knew already back then - two years ago - that it was the end of that style. I felt like I wanted to do something new. I had started to listen to a different type of music that I normally wouldn’t listen to, more alternative… I’ve always listened to classical music as well, a mix of different genres. Lately I’ve been listening to music from the Sixties and Seventies, and I thought It would be cool to do a modern version of that. Some kind of folk-pop, but I keep my own melodies.”

You got nice feedback.
“Yes, very. I didn’t know that I would get that much positive feedback back then. But it took two years until I started writing in Swedish. I’ve never done that before, I didn’t know how.. It’s different from writing in English because you have to put it in the right way, and not make it cheesy. On the other hand, it was also nice to write in Swedish since I could be more detailed and describe things in a different manner. I had a larger vocabulary and I could explain things in a new way.”

A few years passed until you took that step. Did you hesitate to go in that direction? You got some requests of doing so, and people wondered if that was you new thing.
“It wasn’t the obvious choice directly after Så Mycket Bättre. I released an album in English a few months after that. But I knew that I wanted to try, and when I finally started writing in Swedish it felt good. At first I didn’t know whether it was good or not, so I had to play it for some people, some friends, despite the fact that I felt good about writing in Swedish from the start.”

What did they think about it, then?
“They thought that it was really good. And that’s why I continued, because it felt like the music spoke to them in the way it was supposed to.”

The recordings have been made in the legendary Atlantis studio in Vasastan, and we will soon talk about how the environment and music was affected by that. But first we will listen to what it sounds like on your new single Ta mig tillbaka.

The Atlantis studio is a historical place where many great Swedish artists have been working over the years. Ironically, your new single is also a flashback. But it doesn't go back as far as to those artists’ time.
“Exactly. It’s a singer/songwriter type of song, but usually those songs are about the Sixties and Seventies, you’re more used to hearing that. I was listening to Bruce Springsteen and thought that it would be cool to write that kind of song but with a flashback to when I grew up, to the late Eighties-early Nineties. It’s a little trip down memory lane back to that time. I sing about when I played Nintendo 8-bit, cycled around humming Billie Jean, my first trip to Paris. Today everything is available and it’s difficult to feel that you’re longing for something. I remember when I got my first CD or waited for an album to be released. It felt so much bigger than than it does nowadays when we have Internet and cellphones. I miss that sometimes. Even though I like electronic things I still miss the old days.”

You’ve had a big audience for many years, also internationally. What’s their opinion about the language change?
“I thought that they would be more disappointed than they are, actually, the non-Swedish fans. They have supported this a lot, which is good to hear. They listen to the song and think that it’s great. I know that many fans have translated the lyrics, and asked for a translation. They help each other, the Swedish and the Non-Swedish fans - Swedish fans have translated the lyrics for them. So they listen to Ta mig tillbaka and think that it’s good.”

So is it tempting to record an English version of Ta mig tillbaka?
“I could do that. I’ve thought of it, actually.”

Is it in the making right now, or?
“No, I haven’t started, but I’m thinking about it. We’ll see.”

If you listen to the sound of this song, it’s very analog with real instruments. I can imagine that the Atlantis studio has influenced the production a lot?
“Exactly. I recorded a song there last year, with David Lindgren Zacharias and Ollie Olsson who’s been writing a lot. We made a tribute song to Ted Gärdestad on the album that was released then. That’s the first time I recorded in the Atlantis studio and we recorded everything live, where I sang the song simultaneously with the band. I had never recorded a song like that before, but I thought that it was really cool and that I wanted to try it again. When I had decided what kind of sound the album should have, it felt obvious that I should record in the Atlantis studio again. I wanted to record everything live, and that the song should be almost ‘one take’, which gave it a new kind of flow. We went back there and recorded with the band that I worked with last year, and with Ollie and David. It felt really cool to control the music in a completely different way. Instead of sitting by the computer we had live musicians. It was cool to shape everything out of that.”

Does the historical environment influence the recording?
“I think so. There’s a special atmosphere in there. You can feel that a lot of things have happened in there - maybe that’s because you’re aware of that already. But there’s a good atmosphere in there, so I think that helps when you’re singing and playing instruments there.”

That kind of studio is not very common these days, when a lot of music is made in front of the computers at home. Which trends do you think will come and go concerning recordings?
“I think that both kinds will get bigger. There will be more of the kind when you sit at home and create a song by using your laptop, which many people do nowadays. And then I also think that we’re going to want a more organic, live, old fashion production. That sound will get more and more popular, I think.”

As a reaction to the other sound? “Yes, because there’s been a lot of programmed music recently. It feels like many people eventually would like to hear a more organic sound. You notice that in programmed songs as well, they even use more guitars and real instruments. Also, vinyls are more popular now than they were 5 years ago. We go back to the old times, sort of.”

Your new album is out in September. Thank you for visiting Musikplats today, Darin!
“Thank you!” 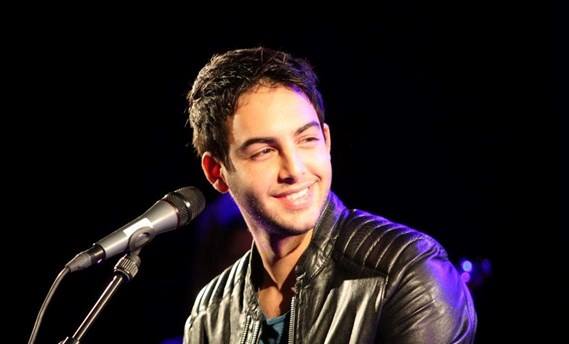