Darin's interview at P4 Musik: "I'm single, we can say"

April 03, 2015
Darin was the guest on Sveriges Radio's program "P4 Musik" on Saturday, April 4th. Here's our translation of the interview.

The interview begins with Darin talking about his Swedish songwriting progress and the Atlantis studio. Furthermore, they discuss Ta mig tillbaka and reminisce about his childhood memories. He says that MTV was the biggest thing for him back then, but also that he waited for The Lion King to be released on VHS - so eagerly that he was standing outside the store and waited for it to open. They proceed by talking about his career.

Do you have a mentor, someone that helps you in your career?
"Yes, I have my team. But I also talk to my friends and family about what they think. I like to ask others for their opinion."

Is anyone of them more important than the others?
"My parents, both my mom and dad. They are both very musical. For example, if it weren't for my dad, I wouldn't have released my song Nobody Knows as a single. I had a CD with 25 demo songs that I had written, I played them for my parents, and my dad really liked Nobody Knows."

You've been in the spotlight for 10 years. But privately, do people leave you alone?
"Yes, it's okay. People are cool. Sure, people look at me and sometimes they walk up to me and want to take a photo, but it's not like it's bothering me."

But do you ever need to 'withdraw from the world' or be at a particular place when you're about to get creative?
"It must be a place with good energy. But to me it doesn't matter if it's out in the woods or in the city. That's why it was so great to record in the Atlantis studio, because it had that kind of energy, where I felt like I got more creative. Usually that's in a studio environment that itsn't too 'clean', not too 'fancy' with the coolest mixing console - more like the opposite. I don't know how to explain it, but it should not be too 'clean'."

They talk about what Darin does when he isn't working, and after a moment of thought he finally concludes that he travels a lot. He spent a lot of time in Berlin and worked in Los Angeles last year. He's not the kind of guy who grabs a coffee with his friends, but more of an 'adventure' kind of guy who likes hiking and diving during trips.

Listen to the full interview (in Swedish) at this link. 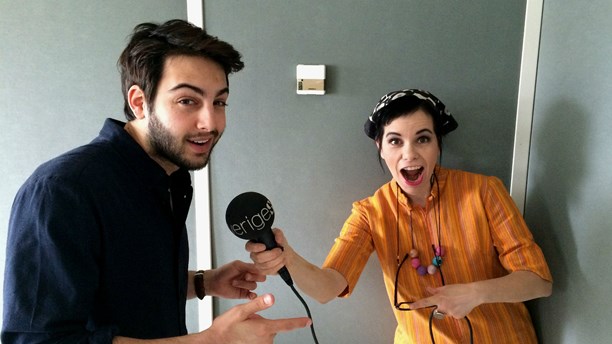