May 21, 2015
After being gold certified two weeks ago, "Ta mig tillbaka" has officially sold more than 40,000 copies in Sweden, which equals to 5,200,000 streams on Spotify, achieving a Platinum certification!

The single is Darin's sixth to achieve such certification, after Money For Nothing, Nobody Knows, Stockholm and the triple platinum selling En apa som liknar dig and Astrologen, and Darin's second to be also self-written. Besides, "Ta mig tillbaka" reached a new peak on the Swedish official singles chart, ranking at number 11th. 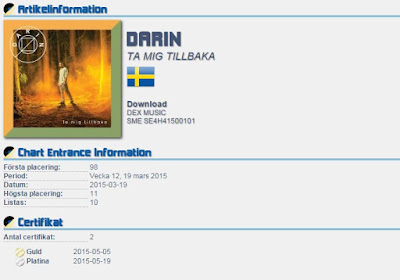