Behind the Scenes of the Nobody Knows Music Video Shoot

June 22, 2015
Darin Worldwide had the chance to be on the set of the music video for Nobody Knows, and have a little chat with Darin.

When we arrived at the location in Singapore, we talked to the photographer, Johan Hannu, who claimed that they aim for capturing the Singapore spirit, and especially show Singapore by night. Thereby, the music video will include many pictures of the city’s traffic and buildings. We also learned that parts of the video will be filmed in Stockholm. As we already know from Darin’s Instagram, the video will also show pictures from a rooftop and Darin walking in the streets of Singapore.

During our talk with Darin, he told us that although it is the last day of shooting, they are far from done. “We will work until 8 in the morning. It’s just getting started.” Darin also added that the video will show the fast traffic and the lights in accordance to the uptempo parts of the song, and they will use a green screen to give the vision of Darin standing in the middle of the streets singing the chorus.

Check out all of our photos from the video shoot on our Facebook page. 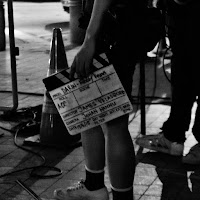 Furthermore, we asked Darin about his recent trip to the Philippines with SOS Children's Villages. He said that TV4 will broadcast videos from the trip later this fall, and that things have changed for the better since his last visit.
“It was great to see Angel. She goes to school now, which is awesome. And we celebrated her birthday, I had brought her gifts from Sweden. Also, we tried to go to Smokey Mountain, but they had closed it down, and people aren’t allowed to live there anymore. It’s great, their government has started new projects and began building new homes for people to live in instead.”

Darin also stated that he has a busy summer and autumn ahead, as he will go back and forth between Sweden and Asia, promoting Fjärilar i magen and Exit in several countries.

What’s the plan? Asia and Sweden at the same time?
“Yeah, I have to go back and forth. Both now in the summer and later. I’ll go to Australia, too, and New Zealand. Also the middle east, Dubai and such places. And a tour in China is settled, in October, where I’ll visit Shanghai and Beijing, and other big cities.”

Additionally, he will also do more promotion in the Nordics.
“Norway, Denmark, Finland. I’ll also perform on Norwegian television again this summer, but I don’t know the name of the show.”

Moreover, we can officially confirm that the song Darin performed at Moraeus med mera (airing this fall) is called "Juliet". He said that the lyrics are a modern version of Shakespeare’s Romeo and Juliet. Although nothing is decided yet, Darin told us that he wants Juliet to be his next single and that he will probably perform it for the first time on live TV at Allsång på Skansen on July 14th. Thereby, Juliet will probably be released as a single before the album release on September 25th.

Regarding the new album, Darin said that it is almost finished.
“We’re done with the mixing of the album. Now it’s only mastering left, then we’re finished. There are many strong tracks, it was really hard to choose the singles. The first single was also hard to pick. I wanted to release something that said “this is the new sound”. Ta mig tillbaka wasn’t an obvious hit, since it’s a more singer-songwriter type of song, but it was great that it worked so well.”