June 04, 2015
Darin was recently interviewed on Lilla Aktuellt, a Swedish news broadcast for children which airs on Barnkanalen/SVT. The short video includes clips of Darin answering questions and singing in the studio, as well as parts of the Ta mig tillbaka music video and older videos. Darin also signed a bag which can be won by a fan. The contest is open for international fans as well. Find more information below.


During the interview, the reporter starts with comparing Ta mig tillbaka to Darin’s older songs and claims it to be very different compared to his previous sound.

Darin says that the most important thing is to make people feel stuff when they listen to his songs. But he states that Ta mig tillbaka conveys a different message than his older, uptempo songs about having fun and partying:

“It’s a bit deeper with lyrics that are supposed to affect people more.”

As clips from the Ta mig tillbaka music video is shown, the reporter talks about the song and mentions 8-bit, a concept which Darin has to explain to the young audience, and he compares it to today’s Xbox or Playstation 4.

“Back in the days, there were no iPhones, Sony Mobiles, no phones with games in them. So that was very new, then it was even more ‘wow’".

You sing that you want to go back to those times, which sounds somewhat sad?
“No, I’m very happy about how things are today.”

For a chance to win the signed bag, follow these steps:

1. Click on this link
2. Answer the question "Which city did Darin grow up in?"
3. Fill out the form according to the instructions on the photo: 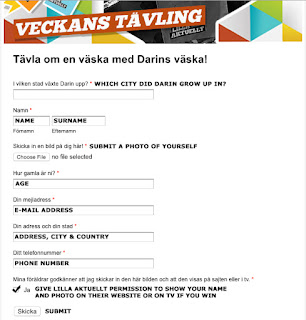 The winner will be randomly selected by Lilla Aktuellt.