Fjärilar i magen gets Platinum certification

April 15, 2016
After nearly seven months since its release, "Fjärilar i magen" has finally achieved its first platinum certification, selling more than 40,000 copies in Sweden. This is only Darin's second album out of seven to get platinum certified, after Darin's self-titled album back in 2005.

But that's not all! The album also broke Darin's own record, staying in the official album chart for a total of 29 consecutive weeks. Before today, the record was held by "The Anthem", which charted in the Top 60 for 28 non-consecutive weeks. 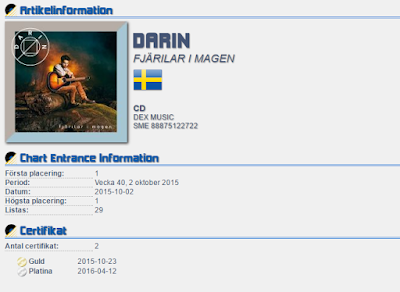