Every day for six days at 18:00 CEST starting from 27 May 2016 we will be posting a picture exclusively on our Facebook page. The picture will contain a set of emojis which symbolize a song by Darin. The used emojis might also refer to scenes or elements showed in the music video of the song. Your task is to guess what’s the represented song by leaving a comment under the posted picture. The fastest to write the right answer will be awarded 1 or 2 or 3 or 4 points according to the degree of difficulty of the daily game. Each degree of difficulty is marked by one color shown in the picture. The specific amount of points associated to each color will be revealed at the end of the challenge in order to keep the winner secret until then. The contestant who gets more points wins the contest and the prize: two adhesive cards signed by Darin and two pins, as shown in the photo below. 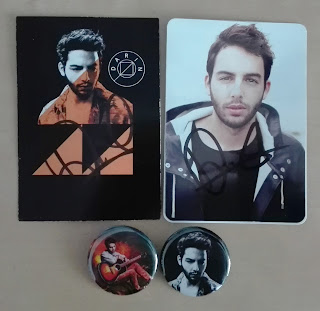 The contest ends on 1 June 2016 at 23:59 CEST while the winner will be announced the day after. Please note that edited comments will be checked.