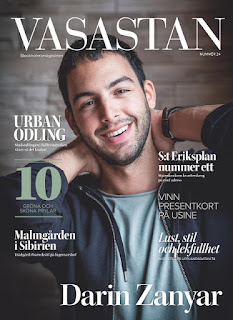 Darin was recently interviewed in the latest issue of Vasastan Magasin, where he talked about his career and life in general. Above all, he revealed more information about his new album.

”At the moment I’m halfway done with my new album. I have written half of the songs, but I haven’t started recording yet. It’s in Swedish and I’m doing it my way, to the fullest.”

While discussing his background, Darin mentioned not feeling Swedish nor Kurdish despite feeling at home in both places simultaneously. This has inspired him to write a song called Identitetslös (identity-less/without identity), that might end up on the album.

Apart from the new album, Darin says that he is also working on another project with a British songwriter in Los Angeles, describing it as an entirely different thing that will be revealed later on.

”It’s the same style but two different languages. I feel comfortable in both, but Swedish is closer and more personal.”

Read the full interview in Swedish at this link.
album interview new album