'Nya Låten!' Podcast Interview: "The new album will be out in November" 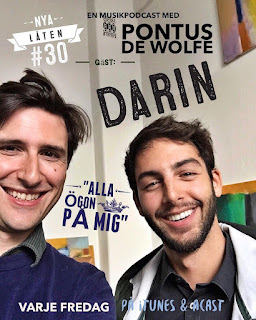 Yesterday Darin was interviewed in Pontus de Wolfe's podcast Nya Låten! (The New Song!). Apart from mainly talking about Alla ögon på mig, Darin also asked his fans for help and revealed new information about his upcoming album. We summarized the interview below:

Firstly, Darin explained the reason behind releasing two singles at once: Alla ögon på mig and Tvillingen are so different and he couldn’t decide which one to pick as a single. Since his audience is so diverse and listens to different types of music he wanted to give something to everyone.

Moreover, Darin said that Alla ögon på mig has been on his mind for several years, but since it was too difficult to talk about he didn’t write it until about a year ago. He was very nervous about the release but believes that a lot of people can relate to the loneliness he’s singing about. He talks about his long journey since Idol and is very clear about the fact that there's been more positive aspects than negative ones, despite the content of the song, explaining that his perspective was very different from the audience’s.

A recurring subject in the interview is the Alla ögon på mig-line ”Jag var produkten som blev kött och blod” / ”I was the product that became flesh and blood”, and when that change happened. To Darin, the big change was when he could show people who he really was during Så Mycket Bättre. Another important part was when he released Fjärilar i magen with more personal lyrics than before.

Darin was also asked about upcoming live shows and said that he’s going to do concerts later on, where he’ll sing mostly new songs but also mix them up with old ones. But he hasn't decided anything yet, and wants his fans to send him suggestions of songs to sing during the tour.

Finally, he talked about writing, producing and mixing the upcoming (still untitled) album. When it comes to production of the songs, he thinks that the most important thing is to do what sounds best for each song, regardless of things like style, structure and length.

Mentioning that he’s in the process of finishing the album, he reveals that it’s is supposed to be finished today, september 22nd (the day after the interview). Although he didn’t want to reveal the exact release date yet, he stated that the album will be out in November. We can probably expect more information very soon!