Darin live with "Tvillingen" at Idol 2017 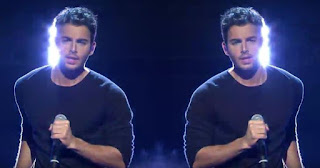 Darin is finally going to perform "Tvillingen" on Swedish TV on prime time - but most importantly, he's doing it on Idol! The last time he was a guest on the show that made him famous in 2004 was two years ago, when he opened the Grand Finale with a stunning performance of "Microphone".

Unfortunately, Idol is not broadcast worldwide via TV4 Play, but Darin's performance will be available on this page shortly after the show ends.