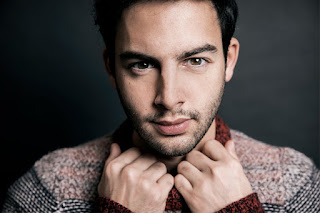 Yesterday the Swedish newspaper Metro published a new interview with Darin. Read our summary below.

Firstly, Darin talked about his upcoming album and its personal songs, mainly Alla ögon på mig and the perspective it gives on his path to fame. He mentioned being either loved or hated which wasn’t always easy to handle for a 17-year-old. If he could go back in time and give advice to himself at that age, he’d tell himself to always trust his own judgement and not take the hate and criticism personally.

He was asked about what it was like to turn 30, and mentioned that time has gone by very fast but that he’s still had time to experience many things. But he wants to do even more regarding his music and personally, including more traveling and exploring as well as learning more about finding his true self.

Another main subject was how Darin’s been keeping his personal life secret over the years. He’s never liked sharing too much and says that it feels good to do what feels best for him, and that he doesn’t have to share everything he’s doing just because he’s famous. To him it’s all about the music, and he shares what he wants to share in the lyrics of his songs.

“I think it’s about my personality, to me it’s natural to keep things like dating, family and such things private. I wasn’t sure if I should release Alla ögon på mig since it’s so personal, but I feel good about it now. I think and hope that my audience will like it.”

He’s looking forward to the upcoming spring tour and says that he wants to do a 2.0 of the last tour. He’ll visit not only Sweden but also Finland, Norway and Denmark. Only the Swedish tour dates are out yet, get your tickets here.


Finally, Darin was asked how he feels about an international career. As we’ve learned before, he said that even though he’s focusing on the Swedish music at the moment, he’ll keep making English songs in the future. He talked about his Asian tour and being surprised by his Chinese fans greeting him at the airport. He also mentioned the US, explaining that he’s only had his music played there and not yet been there on tour. “I haven’t really tried that to the fullest yet. I definitely want to keep making music in English to make it work internationally.”