The Darin Worldwide interview, Part II: "Break the News is my favourite album"

September 22, 2013
On September 20th, Darin performed at Gröna Lund, Stockholm, for the last date of his summer tour, the #DarinTour2013. Perhaps it was the lights, the dance steps, or the fire popping out of the stage during the performance of Playing With Fire, or maybe it was the march on What It's Like, exclusively added to the setlist for this concert, that made everything appear as a new era has started for the popstar.

After the concert, some members of the Darin Worldwide Team got once again the chance to quickly meet Darin in the backstage, while he was trying to deal with his newest Sony Xperia Z that he used to take a picture of the audience for his Instagram.


The #DarinTour2013 is now over. How does it feel to be done with it? Is it a positive feeling thinking that you can get back to normal life, or not?
Normal life, for me this is normal life. It's always different, sometimes I tour, sometimes I'm in the studio and sometimes I travel, but it all feels natural, it doesn't feel like this is all normal. It feels sad that it is the last concert, but at the same time I'm looking forward to new things.

What's the most memorable moment of this tour?
Today is surely one of them. But also the concert at Cirkus, in Stockholm, and the one in Gothenburg, at Kulturkalaset.

During the tour, you played piano. Are you using the guitar that you bought as well?
Yes, but I'm not that good at it yet, haha.

If you could evaluate your latest album comparing it to the other albums that you have released during your career, which mark from 1 to 10 would you give to it?
Comparing it to my other albums? Well, it's very difficult to do..
We know Flashback is your favourite..
No it's not anymore, it's Break The News. You know, some weeks ago I was listening to songs like Like No One, Homeless and I realized that that is my best album. But anyway, I think I would give 8 to Exit.

We know that you have recorded some songs after the release of Exit. Are you planning to release more music within the end of the year?
Maybe, I don't know.

There was a rumour that Before I Pass Out would be the fourth single release from Exit. Is it real?
No, definitely not. I actually don't know if to release one more single from Exit or just work on my new material.

Right To This Point and All Gone were two great songs that could fit perfectly the sound of Exit. Why did you make the decision of cutting them off of the final tracklist?
The production wasn't the same as Exit. But it's not said that I won't release it in the future, or release them as extra material for my fans, because I heard that a lot of fans have asked about that.
Maybe you can upload them on Youtube.
Maybe I will.

Have you ever thought of starting a career as an actor?
No, actually not. I actually received some requests but I turned them all down.
Why?
Because I don't see it as something I want to do for the moment.
But you should.
You think? Well, then I'll think about it.

What about being a judge in Idol instead?
Oh I had never thought about that, but if I ever get a request, then I would consider accepting it.

On the final page of the Lovekiller album booklet there is a series of numbers in the middle of the page. Are those numbers just part of a catalog number or do they actually mean something?
Yes, there is a meaning, but I'm not going to reveal it.

Last question: is there any number which has marked important or even random events in your life?
Yes, it's 2. 2 and 13. What's yours? 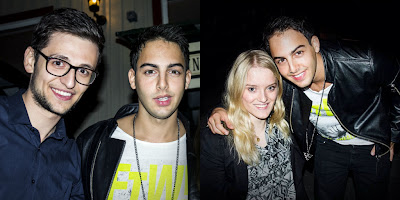