May 07, 2015
After sharing the news that "Ta mig tillbaka" had passed 2,600,000 streams on Spotify, we can now confirm that Darin's first single from his seventh studio album "Fjärilar i magen" has finally achieved the Gold certification! According to Sverigetopplistan, the single succeded in selling 20,000 copies on May 5th, as you can see from the picture below. Besides, after topping DigiListan (Swedish digital singles chart) last week, "Ta mig tillbaka" has reached a new peak on the Swedish official singles chart this week, ranking 13th and making the single Darin's highest ranking on the chart since "Lovekiller". 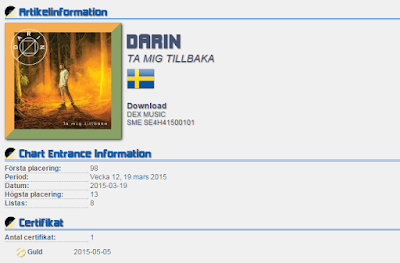